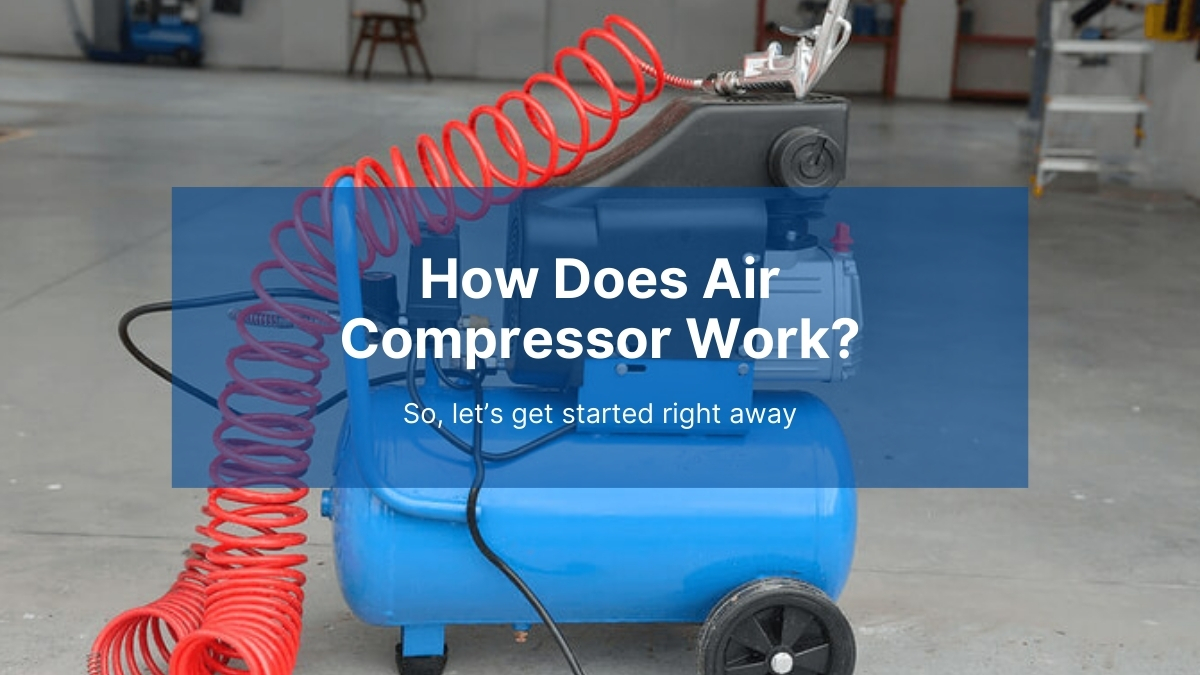 An air compressor is a handy tool that is used for both industrial purposes as well as DIY purposes at home. This tool helps to complete your tasks in an easy manner, as they have a lot of uses. Such as while in industrial areas you can use an air compressor to fill gas in cylinders, scuba diving, for creating energy in order to run the pneumatic tools as well as spray guns.

Pumping up the automotive tires. Most of the air compressors come up with a built-in mechanism of heating and cooling.

In this modern world, air compressors are quite important for even basic operations in factories or even in workshops all around the world.

Before the invention of air compressors, there were many power tools but with this invention, the workload became lesser and easier.

How do Air Compressors work?

Air compressors work by forcing air into a container and then pressurizing it. Other than that, the air is forced through the opening into a tank, this is the place where the pressure starts building.

Consider the working principle of air compressors as an open balloon, this is because the compressed air can also be utilized as energy when it is released.

Air compressors are powered by an engine that works to turn electrical energy into kinetic energy. In simple words, it works in a similar manner, just like a combustion engine, by using a crankshaft, piston, valve, head, and a connecting rod.

From the main opening, the pressurized air can be used to provide energy to different types of tools. Some of the famous tools that require energy in that way include nailers, impact wrenches, sanders, and paint sprayers.

There are different types of air compressors and every type works with a different mechanism. The differences between their working principles are not that much but it boils down to the way a compressor handles its air displacement.

Types of Air Compressors with their Working Principles

Basically, there are two main methods that are displaced in air compressors for better usage and working mechanisms.

The first type is the positive and dynamic displacement.

Every air compressor uses several subcategories that we will cover soon.

The working mechanism is maybe different with every air compressor type however, the result is almost identical. Now, let’s take a look at positive and dynamic displacement.

The positive displacement air compressors force the air into a chamber where its volume can be adjusted in order to compress the air.

During the process of positive displacement, an umbrella term is used to explain different types of air compressors that generate power with the help of positive air displacement mechanisms. The internal systems are of course different in various machines but the mechanism to provide power remains the same always.

Here are some types of positive air displacement compressors that are better for commercial work, however, the rest are good for DIY hobbies at home or private (low-scale) projects.

As positive displacement is quite a common type of air compression method that is why there is a large variety of positive compression available.

These types have different working mechanisms and some of them are for commercial and industrial use while the other ones are highly recommended for home projects and smaller applications. Here are the different types of positive air displacement compressors.

Rotary Screw compressors have two screws inside the motor, that continuously run in opposite directions. The motion inside the rotary screws creates a vacuum that sucks the air inside it.

In this way, the air gets trapped between the screw threads and hence it is compressed. In the end, it is sent through the output in a containment tank.

A rotary vane compressor is also known as a vacuum pump, and it has a quite similar principle to a rotary screw. It is equipped with a rotary vane, a motor that is situated off-center inside a rounded cavity.

The engine has blades that consist of automatically adjusting arms. The arms approach the air input, after that, they become elongated, and hence they create a large air cavity.

Whenever the motor spins, the moving air spins within it. The arms move toward the output and then they get smaller hence creating a smaller space between vanes and round casing where the air compresses.

The best thing about this module is that the vane-operated rotors are small and easy to use which makes it quite easy for homeowners and contractors to use them.

In a reciprocating air compressor, when a rotor spins it causes the piston to move up and down. Whenever the piston goes down, the free-standing air is pulled inside the chamber.

After that, the compressed air is then forced back outside as soon as the piston rises back up.

In single-stage air compressors, the piston compresses the air into one stroke. (A stroke is one full rotation of the crankshaft that drives the piston). The simple, single-stage design makes different compressors ideal for private projects.

The compatible design of a two-stage air compressor makes it easy to create higher pressures. As we know that the kinetic energy is responsible for compressing the air, hence it generates heat. There are a lot of two-stage systems that allow cool air as it travels from one cylinder to another in order to avoid overheating.

In the case of dynamic displacement, the compressor uses a rotating blade that is further powered by an engine to generate more airflow. In this way, the air is restricted to create pressure and the kinetic energy gets stored within the air compressor.

The dynamic air compressors are usually designed for large projects such as chemical plants or steel manufacturers, so you will not find one at your local mechanic.

The first type is axial compressors, these use a series of turbine blades that generate air and then help it undergo through a small area. The axial compressor is similar to bladed compressors and they operate with stationary blades that often slow down the airflow, hence the pressure increases.

Axial compressors are unique and have limited functionality. They are used in aircraft engines and in large air separation plants.

Centrifugal or radial compressors work by bringing air into the center throughout a rotating impeller. It is, later on, pushed forward through centrifugal or outward force.

The flow of air in centrifugal compressors is slowed down by using a diffuser. In this way, more kinetic energy is generated.

Electric high-speed motors are more likely used for these kinds of compressors. One of the most common types is the HVAC system.

Working of Regulator in Air Compressor

A regulator is attached to the outlet of the compressor’s air tank and it features an adjustable nob as well as a pressure indicator. But how does it works?

When you rotate the knob counterclockwise, it will push on a spring that restricts the valve and lowers the pressure by reducing the supply of air from entering into the regulator.

On the other hand, when you turn the knob clockwise, the spring and the valve release. This allows more pressure to get released through the output.

In most single-stage air compressors, the preset pressure limit is about 125 PSI. When this limit is full, the pressure switch goes off in order to stop the motor, and hence it produces compressed air.

In most of the operations, there is no need to reach the pressure limit, because many compressors are set to airlines to a regulator.

The reciprocating piston is equipped with the following parts:

The working principle of a reciprocating piston is similar to a car combustion engine. The crankshaft rod raises the piston in the cylinder and then pushes it inside the compression chamber.

This decreases the air volume and increases the pressure. The piston hence closes and the compressed air is forced to get inside the storage tank.

The piston opens again in order to draw in more air and hence the process starts over again.

This scheme provides the power to the motor in some cases, it depends on the type of application to be performed.

The air compressor is powered continuously with a slide valve that reduces the air tank capacity whenever the specific compression demand is completed. This scheme is more common in factory environments and it also involves a stop timer that is why it is known as a dual control scheme as well.

The modulation scheme includes a sliding valve to adjust pressure by throttling the inlet valve. Hence it matches the compressor’s capacity to the demand.

These adjustments are less effective on the rotary screws, as compared to the other types.

The variable displacement control scheme adjusts the volume of the air, hence it is pulled into the compressor. In rotary screw compressors, the method is used to modulate inlet valves in order to improve efficiency and pressure control accuracy.

Variable speed is another effective way to control a rotary compressor’s capacity. But it reacts differently with different types of air compressors. It carries the speed of the motor and it also affects the overall output.

So, here’s a short breakdown of air compressor types along with their working mechanisms. I hope that you will enjoy reading this article.

Make sure to drop down your reviews in the comments section. Also, if you have any queries then let us know.